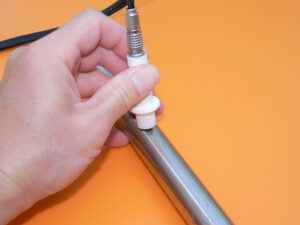 Sciensoria has released a new eddy current nondestructive evaluation (NDE) system in 2015. It is the Conducsens™ which can measure several parameters of a tested material: thickness, distance, electrical conductivity, and magnetic permeability. The parameters can be measured without prior calibration, thus considerably saving time and cost of calibration gauges. 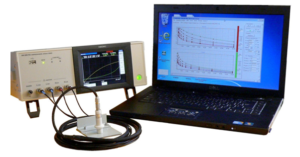 The eddy current technique in nondestructive testing/evaluation is well-known: a magnetic field creates induced currents inside a conductive material, called eddy current. These current flows depend on the material properties like geometry (thickness, distance), and physical parameters like electrical conductivity and magnetic permeability. Flaws like voids or cracks also disturb eddy current flows. Consequently, the secondary magnetic field created by the eddy current reflects the internal state of the tested material. By measuring the probe impedance, one can indirectly determine this magnetic field and can extract information about material health, physical properties, and geometrical parameters, for example. 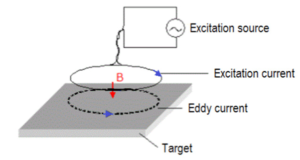 Thickness is one of most important geometrical properties of an inspected object. For example, the wall thickness of a tank or a tube under a corrosive environment is regularly inspected in order to determine if a leak or explosion is imminent. There are also many examples regarding thickness measurement of thin sheets in metallurgy, aluminum stamping, additive manufacturing, hologram printing, etc. Another example is tube bending: the thickness of the tube wall is measured at several points on its circumference and bending angle is adjusted as a function of the measured thickness values.

Traditionally, the eddy current technique is sensitive to many parameters at a time: distance, thickness, conductivity, permeability, etc. This is a strong and also a weak point, because when more than one of the parameters vary, it is very difficult to interpret the signal changes. Calibration is only possible for a small number of influencing parameters, because the total number of the calibration gauges necessary for the operation is M= NP. N is the number of calibration points for each influencing parameter, and P is the number of the influencing parameters. It is easy to see that if P increases, M increases very quickly and tends to the so-called “numerical explosion”. As manufacturing calibration gauges requires time and has to be done carefully, it is often impossible to make a great quantity of samples.

The Conducsens™ has a decisive advantage: it is based on a proven large physical model which takes into account the influence of the considered parameters: thickness, distance, curvature, conductivity, permeability. Using the model, one can predict the influence of each parameter, thus avoiding the use of calibration gauges. The model can also be inverted to compute the parameters using the measured signals.

Fig. 3 – Synoptic of an inversion process using a physical model

An example of application is the measurement of a thin sheet made of a magnetic material: Nickel. Because the sheet is very thin, it is impractical to measure it with a contact micrometer. Also because it is wide, it is impossible to measure it in its center with the micrometer. Ultrasound thickness gauges also fail, because the thickness is too small, and the echo returns too quickly to be measured. 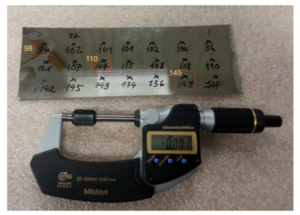 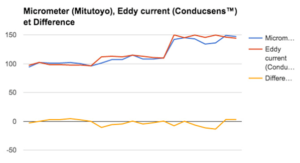 Fig. 5 – Comparison between measurement results given by a high-grade Mitutoyo micrometer (blue curve), the eddy current Conducsens™ NDE system (red curve).  The difference is represented by the yellow curve.

For this application, Conducsens™ can show its practicality. The eddy current thickness measurement with Conducsens™ is very quick: only several minutes to get dozens of points, while a contact micrometer requires hours.

Fig. 6 – Measuring thickness on the circumference of tubes made of different metals (titanium, aluminum and  stainless steels)

In another application, Conducsens™ is used to measure the thickness of a tube at several points on its circumference. The tube can be made of different metals like aluminum, stainless steel, or titanium, so their conductivities are not same. Compared to the ultrasound method, the eddy current method does not require liquid coupling and precise positioning, thus saving time. So, there are 3 unknown parameters to be determined for each measurement: not only the thickness, which is what we need to measure, but also the lift-off and the material conductivity. The Conducsens™ system performs these measurements very effectively, as shown in the following picture, where eddy current measurement results and ultrasound measurement results are presented together for comparative purposes. As the eddy current method is easier to apply and faster, it is preferred in an industrial environment. 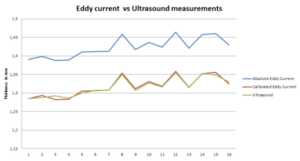 Fig. 7 – Comparison between measurement results given by the ultrasound method (green) and the eddy current method (red and blue).

The Conducsens™ is also practical for application in dangerous environments like nuclear or chemical facilities. In these environments, measurements should be done as quickly and cleanly as possible. That is why eddy current is preferable to ultrasound: no coupling, easier to install, faster, etc.

Other applications of the Conducsens(™) NDE system

The Conducsens™ NDE system designed by Sciensoria is based on a modern computerized approach and can get rid of the traditional constraint of multi-parameter influence. It opens new perspectives in the measurement of thickness in many complex applications, where it can be an ideal complement to the ultrasound method.

Discover our other applications

Measurement of electrical conductivity of graphite by the eddy current method

Measurement of water level in an immersed container

Advantages of the eddy current technique for thickness measurement

Measurement of wall thickness of tubes and closed hollow objets